It’s been a while since I have written a Blog. It crosses my mind all the time to sit and write, but I can rarely sit down and type away without some sort of distraction. I have decided to write short, more to-the-point Blogs that don’t take up a lot of my time and won’t take up a lot of your to read. Who has the time or the attention span of longer than 3 minutes anyways? I do promise to add pictures for a little stimulation.

My big anticipated post-baby comeback show came and went! It was the Ontario Physique’s (OPA) Kitchener-Waterloo Oktoberfest Natural Classic hosted by the new super mama herself Melissa Shadd! What a fantastic and well organized show!  I didn’t do as well as hoped but I was still happy with what I brought to the stage. In 8 months, I had worked off the 50 pounds of pregnancy weight I had gained with baby #4 and stepped on stage which I was proud of.

I could have certainly been more conditioned, but where I believe I lost my points was stage presentation. Some feedback I received was that it looked as though I was preoccupied. My muscle endurance, umph, and overall “presence” was lacking. It showed that I did not put in the practive! It was very humbling and certainly taught me a lesson. It is also certainly something that others can learn from. It doesn’t matter how good you look, if you cannot pose, or if you lack in the muscle endurance to flex and hold your poses, you will lose points.

The show itself was well organized, and even though it was a big and busy show, there was still a sense of control and direction backstage which is great.

Fitness and Glamour Photographer Paul Buceta (www.paulbuceta.com) took some amazing back stage shots of me (some of which I posted here on the Blog. Some other will be posted randomly on my Instagram account @nichellelaus or my Facebook fitness page.

I was very disappointed in myself but am taking it as a lesson and will move forward and continue to train hard for the 2014 season, which is fast approaching!

Up next is to get my Team Laus athletes through the last show of the year, OPA London Championships on Nov 23, 2014. 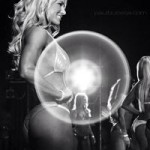